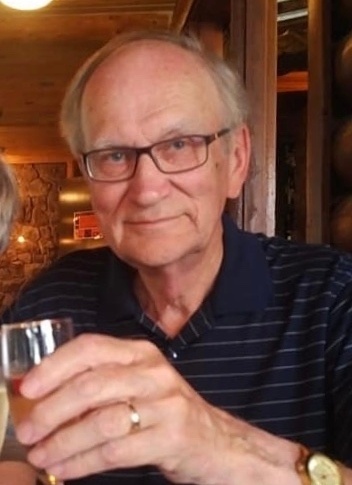 Harv was born in Winkler, the first-born of 6 children and first grandson on both sides. He enjoyed a happy childhood, highlighted by visits to his grandparents’ farms in Manitoba and Ontario, where 2 teenage uncles, Henry Dyck & Menno Kroeker played the role of big brothers to him.

In the June 1952 heat wave, at age 6, Harvey, along with hundreds of other children contracted Polio. With the daily help of his dad who worked at the hospital, they persevered together to help him recover his mobility over a period of one year.

As a teenager he and his friends enjoyed ping pong tournaments in each other’s basements, singing in a trio and playing high school basketball. A highlight of his teen years was a scholarship to attend Gimli Leadership Camp. He attended first as participant and later as staff. He attributed his leadership quality and interest in community affairs to those summers.

In 1965, Harv applied to work in radio and was surprised to be hired by Ben Kehler who became his lifelong mentor. His career spanned 45 years, first as a DJ, where his love of music served him well, then moving on to news and sports. His attention to detail and succinct truth meant his interviews were not to be feared or dreaded. And resulted in him being a trusted source of news for the community. He was a true weather tracker for his own interest and on behalf of the listeners.

He loved his work with the Optimist Club which included; car shows, sportsman’s dinners and the empty stocking fund which he co-chaired with Ann for 20 years. His passion was emceeing the local Remembrance Day service which led to the erecting of the Cenotaph in Altona and several years of Decoration Day services.

Harv (with Ann) was an active member of South Park MB Church where he served as head usher for over 30 years and was a meaningful participant in congregational meetings.
Harv met Ann at the Winkler arena and it was instant attraction. They married at the International Peace Gardens in 1973 and settled in Altona.

The birth of their children, Naomi and Thomas changed his life in a way he had never imagined. He loved camping at Spruce Woods on May Long for many years with the Nikkels and later St. Ambroise became a regular spot. Clear Lake was a favorite annual destination for vacation. The Tamarack Golf Tournament became a highlight of the year. First with Tom golfing as a junior. Then after several years he entered in the senior division while Tom golfed in the men’s. Many happy hours were spent together on the golf course as a family. After his career ended, he enjoyed golfing until October when the weather allowed, golfing with the seniors on Wednesday and Texas scramble tournaments with Tom.

The birth of his grandchildren added another level of joy and fulfilment to his life. The many days spent carrying Ezra, dressing up with Ruby and reading to them endless stories from Cinderella to Leo and Lenny was a joy for all of us to share.

He was a man of few needs, easy going and friendly; often surprising people with his quick dry wit. Harv was modest, loyal and carried himself with dignity. Known for his integrity. Someone once said, “if Harv Kroeker said it, you knew it was true”.

Harv was diagnosed on Thursday, June 6 with inoperable colon cancer. His health declined quickly and he was admitted to Altona Hospital on Wednesday June 19, transferred to the Palliative Care Unit on Friday June 21. He passed away peacefully on the morning of Sunday, June 30.

He was predeceased by his father Jacob S. in 1993 and his mother Annie (nee Dyck) in 2014, brother in law Volker Johnas in 2018 as well as his Nikkel inlaws: brothers in law Doug White and Henry Kopp and sister in law Lydia Nikkel. Nephews David Nikkel and Andrew Nikkel, parents in law Jacob & Margaret Nikkel.

Harv supported many charities, donations may be made to a local charity of your choice.

The family would like to thank everyone for their care and support during these difficult weeks.

To order memorial trees or send flowers to the family in memory of Harv Kroeker, please visit our flower store.