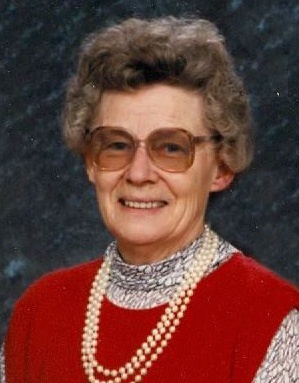 The family emigrated to Mexico in 1923, but returned within a year. She attended elementary school at Kronsthal and was baptized by Eld. Peter Toews in 1942. She married William (Bill) Harms July 9, 1942.

After marriage they spent three years as C.O. Alternative service at D.K. Klassen, Rosenfeld. After the war Bill and Trudie took up farming in 1949 in the Edenthal Area with four sons and a daughter. They sold the farm in 1986, and retired to town of Altona,

Shortly after Bill died in 1998 she moved to Ebenezer Care Home and then as dementia set in, to Eastveiw Place on October 24, 2007, where she passed away after many deteriorating years.

The family Thanks the staff at Eastveiw for their loving care of our mother.

Donations in memory of Trudie Harms may be made to Mennonite Collegiate Institute.

To order memorial trees or send flowers to the family in memory of Gertrude "Trudie" Harms, please visit our flower store.