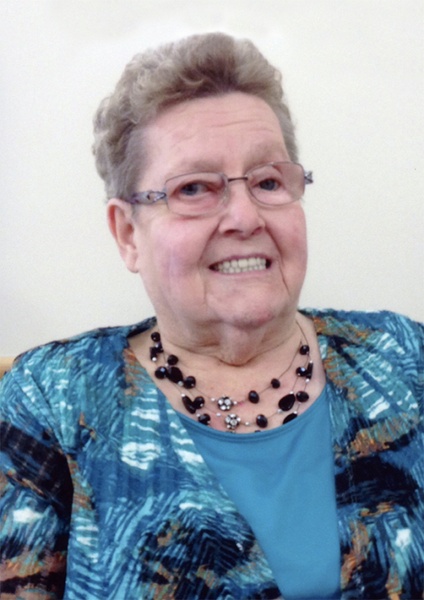 Shortly before 8:00 PM on Monday November 16, 2015, our mother, grandmother, sister, and friend found peace in God’s arms. Her ailing and disabled body will no longer restrain her lively and loving spirit.

She is survived by siblings Wilbert Funk (Sally), Helen Dueck (Jake), Kathy Dyck (John), Dave Stoesz (Ethel), Ed Stoesz, and Art Stoesz (Betty) as well as many nieces and nephews. She was predeceased by her parents Diedrich and Tina Funk as well as stepmother Katherine Stoesz Funk, one brother in infancy, sister Mary Wiebe and her husband Les, and sister-in-law Kathy Stoesz.

Evelyn Funk was born on April 16, 1934 on the family farm west of Altona to Diedrich and Tina Funk. She completed the sixth grade but had to leave school in order to care for her ailing mother. It was here that her skills as a caregiver and housekeeper were developed and perfected. She often said, though, how she wished she could have stayed in school but realized that she was needed on the farm. She lost her mother when she was a teen and was very happy when her dad remarried after a time because her new mom brought sisters … (and brothers) into the Funk family. She often remarked how much fun the girls - Evelyn, Helen, and Kathy - had had together.

She was baptized upon confession of faith in 1952 at the Altona Bergthaler church by Bishop Schulz. On June 3, 1955 she married Jake Penner and they were blessed with two sons and one daughter. The family lived in several communities over the years - Angusville, Kane, Lowe Farm - and ï¬nally Morris where Evelyn and Jake spent their last working years and their retirement.

In the early years, with a young family, Mom was kept very busy running her household. She kept a spotless house with mirror-ï¬nish waxed ï¬‚oors and made sure that her kids’ faces were equally spotless. Cleanliness was next to godliness! She was a cook and baker extraordinaire and there were many people outside of the immediate family who beneï¬tted from her culinary skills. She and Dad loved to entertain friends and her hospitality never ran dry. When not in the kitchen, Mom was busy in the garden, doing the canning, slaughtering chickens or doing whatever was necessary to keep the home running smoothly.

In 1974, when things got ï¬nancially tight, Mom entered the work force while still fulï¬lling all of her responsibilities at home. Her dream was to be a nurse, but, as that was not a possibility, she took a nurses aide course and began working at Eventide Home in Rosenort.  Later she worked in Morris at both the hospital and at the Red River Valley Lodge. At various times she also worked in dietary and housekeeping and held the position of head cook at Morris hospital for a number of years. She had a reputation as a very hard worker and was known for her perpetual cheerful disposition. These qualities and her outgoing personality helped Mom to establish many relationships and strong friendships that lasted through her life.

In retirement, Dad and Mom joined forces in the kitchen. They loved nothing more than to spend a day cooking up a storm and the resulting verenecke, sommaborscht, and buns would ï¬nd their way to the table of some needy soul. This included several trunk loads per year to each of the kids. Many people enjoyed the fruits of their labor!

Mom struggled with arthritis much of her life in addition to other health issues which gradually slowed her down. An artiï¬cial knee became infected in 2005 and caused her to be immobilized for many months. She ï¬nally got a new artiï¬cial knee in 2006 and fought persistently to get back on her feet. Determination and her strong faith in God enabled her to walk again in the spring but summer of that same year again brought disappointment when Dad was diagnosed with cancer.  Her caregiver instincts kicked into high gear as she provided the care to meet his increasing needs. In April of 2007 Mom suffered the ï¬rst of two tragic losses of that year when she experienced a stroke which left her with a paralyzed left side. The second came when Dad died of his cancer in July. It was truly remarkable how she weathered these storms and emerged with loss and disability but an attitude of perseverance and gratitude that encouraged all those who knew her.

Unable to manage independently, the only realistic option was to move into Eastview Place, where she would receive the care she needed. While awaiting placement in hospital Mom made a new fast friend, Tina Kehler and when she was ï¬nally able to move into the Care Home, lo and behold, Tina followed shortly thereafter and moved into the room right beside her. Their exploits at Eastview Place and in the town of Altona, for that matter, are legendary.

At Eastview, Mom was very involved in activities. Her love of baking and cooking continued and she never missed the opportunity to take part in the soup and bun making. She was an unofï¬cial Care Home greeter, as she would generally spend nice days in the sun outside the front entrance and welcome everybody who entered the building. Mom loved dogs and, while sitting outside, got to know by name most, if not all, of the dogs who came by for a walk with their owners. She and Tina loved to watch ï¬gure skating, curling, and dancing on TV and were an active part of the Singing Scripture group.

Love for family was always evident in Mom. She looked forward to family gatherings on any occasion and was very busy on her cell phone, calling grandchildren to check in on their lives. She prayed for her family daily and was to them, as to everybody else, always an encouragement.

The family would like to thank Dr. Kyle Winning and all of the other medical staff who have helped her over the years. Thanks also to the outstanding staff both at the Altona Health Centre and at Eastview Place for their care, love and support. Greatly appreciated were the many visits and meals brought by family and friends over the years with a special thanks to Wilbert and Sally for the love they showed so faithfully. Thanks to Frank and Betty for their visitations and spiritual support. May God bless you all as you have blessed her!

Funeral service was held on Saturday, November 21, 2015 at the Bergthaler Mennonite Church in Altona.  Interment followed at the Lowe Farm Cemetery.

Donations in memory of Evelyn may be made to Eastview Place.

To order memorial trees or send flowers to the family in memory of Evelyn Penner, please visit our flower store.