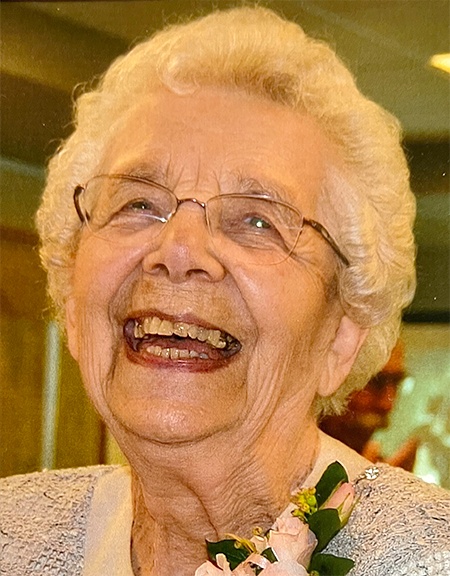 Elizabeth Doell passed away at the age of 95 years peacefully on July 18, 2022 in Altona, Manitoba.

She is survived by her sons Robert (Judith), and James (Sandra), and her daughter Margaret (Jennifer Stoughton), two granddaughters, Laura and Ingrid, and sisters Johanna (Peter) and Helene, and two nieces and one nephew and their families.

Elizabeth was born in Meadows, Manitoba to Johann and Käthe Reimer. She attended school in Meadows, Springstein and the Mennonite Collegiate Institute in Gretna. After graduating 1946 she taught with a permit at several rural one room schools. She attended Normal School and continued teaching in Winkler and Altona, where she met Peter Doell, who she married in 1954. They settled in Altona where they raised a family of three sons and one daughter. Her happy stable life as a homemaker was disrupted by the illness and death of her son Roger in 1969.  Elizabeth’s strong faith helped her through this experience, as well as the subsequent death of Peter in 1974. She returned to teaching as a resource teacher helping many children to improve their reading skills and succeed in school. Her teacher colleagues provided support and many became lifelong friends, as did her extended family, church, and ladies groups such as Homemakers and the Women’s Institute. After retiring in 1987, Elizabeth enjoyed visiting family, bus trips with friends, and spending time with her granddaughters, which often included noodle making. Her meticulous notes show 17 trips to the Canadian Rockies. Elizabeth was committed to serving her community through her volunteer work with MCC, church serving groups, and helping with meals at the ‘old folks home’ at age 80. She enjoyed sewing and handwork such as crochet, hardanger and cross stitch. An avid gardener, she kept an immaculate yard until she moved to the Gardens at age 88. Her health declined in the last few years but strong faith kept her positive to the very end.

Funeral service will be held on Friday, July 22, 2022 at 2:00 p.m. at the Altona Bergthaler Mennonite Church.  A private family interment will take place prior to the service.

Donations in memory of Elizabeth may be made to MCC, or to Mennonite Collegiate Institute.

To order memorial trees or send flowers to the family in memory of Elizabeth Doell (nee Reimer), please visit our flower store.