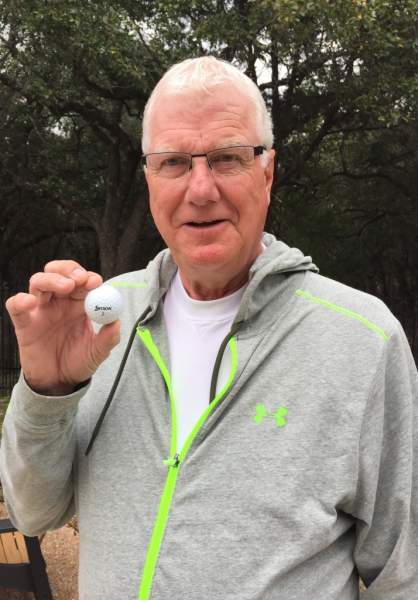 Earl Grant Dick passed away in Round Rock, Texas on February 11, 2015 at the age of 71.  Prior to his death, using his 7 iron, he celebrated a hole in one on the 10th hole at Plum Creek Golf Course.  As Earl would say, “When you got it, you got it!”  His larger than life personality will not be forgotten.

Family, fun and a focus on community capture important aspects of Earl’s life.  Having family as the center of his life, Earl worked alongside his brother Roy and later, his son Jim to continue the family Ford business (Rhineland Car Company), started by his father, for three generations.  Even after retirement, a daily visit to the shop along with helping deliver vehicles or pick up parts were routine parts of his day.

Often the day ended with phone calls and Face Time to each of his children and grandchildren.  In his ideal place, all of us would be at the family dinner table, laughing, teasing and sharing in the great barbecues he and Patty prepared.

Sports was another way Earl was involved in life – as a player, a coach, a spectator and a volunteer.  Through sports, he met Patty, eyeing her up in the stands at basketball and pursuing her with intensity to ensure a ring on her finger would “seal the deal.”

Earl encapsulated fun.  His spirit and impeccable timing ensured he met a friend in any new encounter.  He planned events for his family, which made even the smallest trip feel grandiose and exciting, thus creating the stories he loved to tell anyone with time to listen.

All of his grandchildren can complete the stories of “Vacant Waving Out the Window”  “The Flying Pig!” and “The Tickle Monster.”  Each grandchild will hold a special moment of time that was just with Grandpa that will carry forward his fun spirit.

Earl cared about the Altona Community and was a visible figure in supporting and leading organizations, which make Altona a great place to live.  Years of service on the Altona Curling Club, Oakview Golf & Country Club, Altona Maroons Senior and Minor Hockey, Terry Fox Golf, Run For the Cure and the Altona Town Council captured the best of Earl – people, sports, fun and helping to build the Altona family.

Earl is survived by his wife, Patty; his 3 children and their families; his sister, Carol Dick; his sister-in-law, Arlene Dick and many nieces and nephews.

In lieu of flowers, donations can be made to The Altona Community Foundation at http://altonacommunityfoundation.com/donate-to-acf/

To order memorial trees or send flowers to the family in memory of Earl Grant Dick, please visit our flower store.