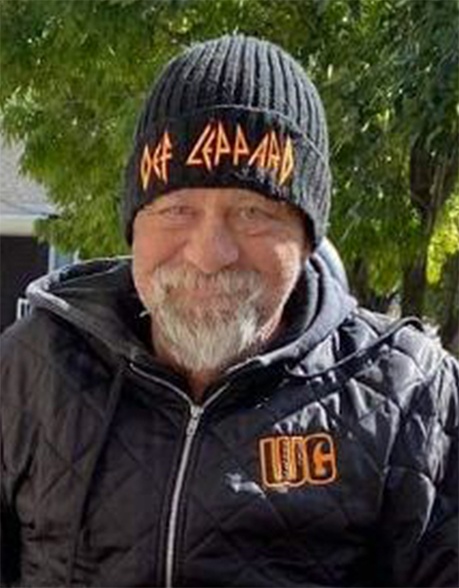 With his family at his side, Dwight John Froese passed away on Sunday, September 26, 2021 at 4:00 pm at St. Boniface Hospital. Dwight passed away at the age of 52 years.

Dwight was born on August 7, 1969 at the Altona Hospital. He grew up on a dairy farm in Altbergthal, where he learned a strong work ethic and his love of animals, nature, engines and wheels was nurtured. He attended New Hope School Dwight graduated from W. C. Miller Collegiate in 1988 with a diploma in Culinary Arts.

Dwight was diagnosed with Juvenile Diabetes at age 12. This presented a huge learning curve for him in his activities and diet, but it did not dampen his adventurous spirit as a boy on the farm. Dwight loved the outdoors, camping, canoeing, water skiing, guitars, and cars. He learned about fixing engines and equipment out of necessity, but it also became an interest and hobby. He bought and restored his first love, an Oldsmobile Omega, while in high school.

Although Dwight and Anny had many mutual friends throughout high school, they didn’t pursue their relationship until both graduated. Their love story began in the spring of 1991; hanging out at coffee dates, walks, and talks carried on for several months until Dwight officially asked her to be his girlfriend while she was working at the McDonald’s drive-thru in Winkler. Dwight crafted a carefully choreographed proposal at Lake Minnewasta, which included actual fireworks. It’s safe to say, Anny said yes! They were married at the EMM Church in Winkler a few months later.

Dwight’s easy-going style and sense of humour was always evident. He was curious about how things worked and was quite the jack-of-all-trades, which came in handy when pursuing his interests and hobbies.

After moving to Winnipeg in July 1993, Dwight started to experience health issues due to complications with diabetes, ranging from neuropathy, collapsing ankle joints, cataracts, and eventually, kidney failure. Dialysis became a part of daily life. He received the gift of a healthy kidney, donated by his sister, Pearl, which happened to be a perfect 6-point tissue match. He became stronger and was excited about his new chance at life. Together with Anny, he served as Youth Sponsors and loved spending time with the Sr. Youth at the Elmwood MB Church, where he was baptized upon the confession of his faith.

Dwight and Anny started the adoption journey and in 2004, the call came in from their social worker that there was a match for them to consider. Siblings, Jovanna and Jayden, were placed in separate foster homes and they could choose either one or both. The name Jayden means “God has heard” and Jovanna’s middle name means “jewel of heaven”. The decision was pre-destined by God. Jayden joined the family first, followed by Jovanna just eight weeks later. Dwight had a new name, Daddy, and he wore it so well. He was a stay-at-home dad, making sure the needs of the children were met while Anny attended university to earn her degree in education. Dwight was their greatest cheerleader.

Dwight and Anny moved to Altona in 2006 when she started her teaching career in Garden Valley School Division. He took a part-time job as a delivery driver at Piston Ring, where his brother, Gerald got to be his boss. This job only increased Dwight’s interest and love of racing. He took many opportunities to watch the local racing circuit, bonding with Jayden and his brother in the process. As a family, as much time as possible was spent driving the motorhome to different places and campgrounds. Dwight taught Jovanna and Jayden important skills for outdoor living.

Dwight loved to play guitar and volunteered as part of the worship team, here at VFC. He served as a service leader, always ready with a joke or a story to start the morning service. He and Anny joined the Board of Directors, recently taking on the role of Board Chair. Dwight joked that it was because he always brought his own chair. He loved his church family and just wanted to serve wherever he could.

As years passed, more health issues arose, including numerous infections resulting in multiple hospital stays. In 2015, he lost his right foot to amputation. After a new prosthetic “robot leg”, he was on his feet again. He and his dog, Dante, became a certified therapy dog team, bringing joy to those in hospital at Boundary Trails. By this time, he was working for Wendall and Carol Heinrichs, helping with fieldwork during seeding and harvest. It was his dream job! Give that man a tractor and he was in his happy place! He suffered a heart attack in 2017, just a few days before Christmas. He received a pacemaker and was back on the mend. Unfortunately, the health hits kept coming including a broken femur, multiple surgeries, cancerous growths, and kidney failure. As his body weakened and infection set in, he lost his left foot to amputation in December 2020.

A few years ago, thanks to his very caring friends, he was gifted a mobility scooter. He put so many miles on it, all while spending time with his other loves, Dante and Luna, his oh-so-faithful canine companions. He took them out twice a day, an hour each time. They cruised the streets of Altona, after stopping at the Coop Gas Bar for a small black Colombian coffee. He talked to anyone and everyone, bringing them joy just by being out with his beloved dogs.

Dwight was so proud to be Jovanna and Jayden’s dad, and Kellen’s almost-father-in law. They gave him purpose and the hope to carry on.

Through all his health struggles, he rarely complained. If he did, it was quickly followed by “there are people that have it much worse than me”. Quite honestly, there aren’t many who could say that. He focused on the good and adapted to new ways of having to do life. He often wondered what purpose he could possibly serve in his very limited body. His purpose was to let love shine, which he did relentlessly and without apology. As a family, we are so very grateful that he got to be such a huge blessing and pillar of strength for as long as we had him. While his body was limited, his love for others and faith in Jesus Christ, leaves the greatest legacy.

Rest in peace, sweet Dwight. No, let us ‘re-froese’ that… tear up those golden streets on your new golden feet. You have remained faithful and finished your earthly race. Until we meet again in the arms of Jesus.

A private funeral service will be held. Viewing will be at Wiebe Funeral Home Altona on Friday, October 1 from 2:00 - 9:00 p.m.

Due to floral allergies the family has requested that in lieu of flowers donations be made to STARS Air Ambulance.

To view the livestream of the funeral service click on the following link : https://youtu.be/xSM-z9eyfjQ

To order memorial trees or send flowers to the family in memory of Dwight Froese, please visit our flower store.