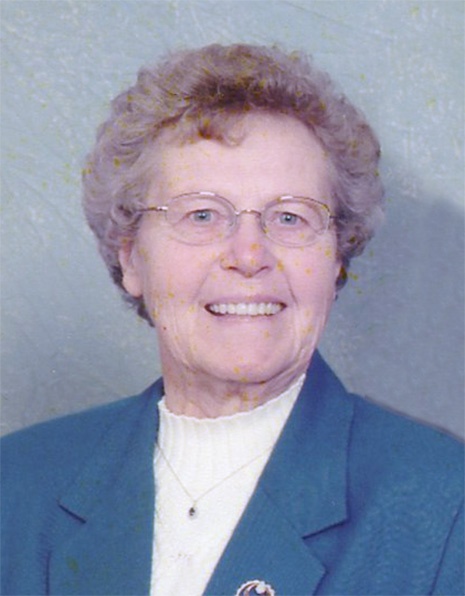 Dora Schroeder of Altona, formerly of Sommerfeld, peacefully entered her heavenly home on February 17, 2021, reaching the age of 86 years.  She was born on March 10, 1934 and accomplished what the Lord had given her to do while she was here on earth.

She is survived by 1 daughter, 4 sons and their families.  Janet and husband Bill Enns, Ray, Wes and wife Verna, Bob and wife Jan, Harv and wife Carla, 10 grandchildren and 21 great grandchildren.

She was predeceased by her husband Jacob H. Schroeder and her parents Henry and Anna Rempel of Edentahl.

Mom was baptized upon the confession of her faith in 1952 and later that year married Jake in a tent wedding on her in-laws yard in Sommerfeld, which also became her home for the first 2 years of their married life.

Growing up as an only child, Mom spent much time at the home of her Rempel grandparents because her aunts were only a few years older than she and became very special friends and playmates. Growing up in the 1930's had its hard challenges and it meant you did not have a lot of things, life was basic.  She always spoke fondly of her Dad working so hard and facing many challenges to keep food on the table and a roof over their heads.

Mom's lifelong work was to be a wife, mother and a nurturer to her parents, but her greatest devotion was to God.  She loved to study scripture, especially the Bible studies she and Dad were involved in with their friends, and listening to Back To The Bible radio broadcast at 9:30 every weekday morning. She had many papers of scripture verses relating to topics that spoke to her, and little poems she had clipped out of church bulletins and newspapers.

Family was the greatest joy to Mom and her life revolved around serving us in our needs, whether it was with food, babysitting grandchildren, helping with any projects, tending to her aging parents, and spending time together.

She and Dad loved to travel, camp and fish, and were able to do so often with friends who became so dear to them.

The gift of music God gave her became such an inspiration to herself and others, especially in her later years.  Playing guitar and singing in the Country Gospel Singers band for many years, took them to care homes, hospitals, churches, summer gospel festivals, fundraisers, and prisons.  God's Word was ministered in song in all these places.  The band recorded a number of cassette tapes which were sold, and all proceeds were always given to charity.  What a beautiful ministry that was.

But that music also blessed Mom so much.  She spent countless hours singing and playing for herself and Dad, and continued until she no longer remembered how to play the guitar.

Alzheimers became part of her journey, and so her fingers didn't remember how to play, but she continued to sing up until the last days.  The words to the songs, Psalm 23 and the Lord's Prayer were etched into her memory and stayed with her the longest.

Alzheimers became a frustration to her at times, when she could no longer use her body as she wished. The disease changed her body, but it never touched her soul and spirit, which remained completely intact and in tune with her Savior.  The staff at the Altona Hospital and Eastview Place care home played such an important role in her life in the years she was there, and we will always be thankful for the care, comfort and friendship she received.  May you be blessed!

Mom, you taught us to accept difficulties, rejoice in victories, show kindness, care for the elderly, love family, serve others and love God.

Many times you blessed your family with the words of Numbers 6:24-26.

We Love you Mom, and you will be missed!!

A private funeral service will be held with burial at the Altona Cemetery.  Viewing will be at Wiebe Funeral Home Altona on Saturday, February 20, 2021 from 1:00 to 7:00 p.m.

To order memorial trees or send flowers to the family in memory of Dora Schroeder, please visit our flower store.