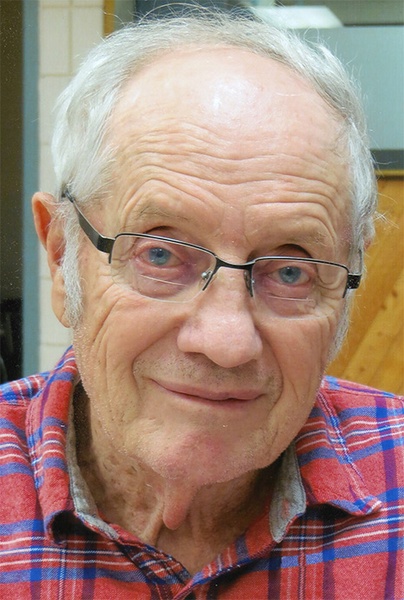 He is survived by his wife Dorothy of almost 61 years and his sons Wes (Char), Gord (Natalie) and Tim and 5 grandsons and 8 great-grandchildren. He is also survived by his 5 brothers and one sister, Frank (Ann), Ann (Jake), Charlie (Hilda), Tony (Bonny), Bill (Deb) and Stan (Carol) and many many nieces and nephews.

He was pre-deceased by his parents Peter & Sara (nee Schroeder) Hildebrand and a daughter-in-law Mary (Tim).

Dick was raised on the family farm in Halbstadt.  He was baptized in 1958 in the Sommerfelder Church in Sommerfeld, Manitoba, and was married to Dorothy Krahn on June 7, 1959.  Before getting married he was working in Herbert, SK and drove back most weekends to play hockey.  After he got married he began working at Coop Vegetable Oils, he then joined the Sawatzky Farm Equipment on highway 30 south of Altona.  Here he learned that he was good at sales.  He then took a job at Loeppky International and again proved that selling was his strength.  He then joined the team at West Park Motors.  He was then approached by Mr. Died Loewen to join him as a partner in the Insurance Business.  Later it expanded to include Real Estate where he sold many farms and then Income Tax Services.

Dick developed many connections and made many friends in all his years selling farm equipment to cars and trucks to insurance and real estate.  Later on mom and dad took on the Real Estate business together.  If a farmer approached him to sell Dick usually knew another farmer that had wanted to expand.

Dick was also involved in playing baseball and hockey in his younger years for teams in the area. Most memories are of his enthusiasm in the corners and in front of the net.

Dick was a member at the Altona EMM Church and also involved in a variety of different areas.  He served as a youth leader, later on he was elected to the Church Board and also as the Board Chairperson.

The family wishes to thank Dr. Kyle Winning, the staff at Eastview Place in Altona for taking such good care of him.

A private funeral service will be held by invitation only (with live stream available for those who wish to view the service online) on Monday, August 17, 2020 at 11:00 a.m. at the Altona EMM Church, with interment to follow at the Altona Cemetery.  Viewing will be at Wiebe Funeral Home Altona on Sunday, August 16 from 1:00 to 8:00 p.m. with family present at the funeral home from 6:00 - 8:00.

Donations in memory of Dick may be made to The Station (YFC Altona).

Click on the following link to view the live stream: https://www.youtube.com/watch?v=Ue_NWfHMkbs

To order memorial trees or send flowers to the family in memory of Dick Hildebrand, please visit our flower store.