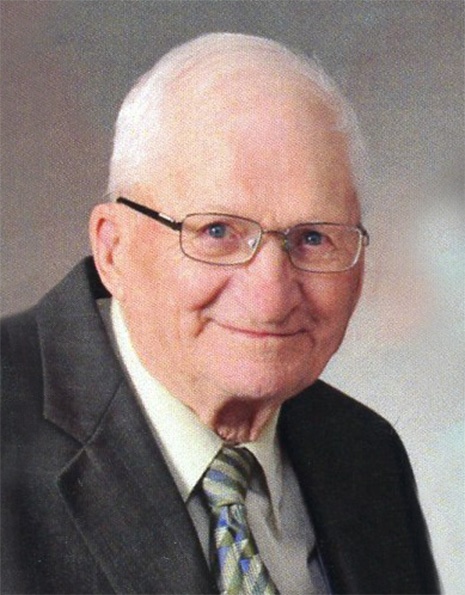 It is with heavy hearts that the family of David P. Wiebe announces his passing. David, aged 93 years of Altona formerly of Kane and Lowe Farm passed away in the early hours of May 13th 2020 at Eastview Place in Altona, MB.

He is survived by his wife of 64 years, Anne nee Ginter, four daughters, Linda (Ernie) Neufeld, Shirley Guenther, Sharon (Rudy) Sawatzky, and Valerie Wiebe (Darryl), nine grandchildren and nineteen great grandchildren. He is predeceased by two brothers inlaw, one son inlaw, and one great granddaughter. A private graveside funeral will be held at the Lowe Farm Cemetery for the family.

David was born on May 13th 1927 in the New Hope school district. Eldest son of parents David and Anna, and eldest brother to Tina, Annie, Martin, and Peter. On June 19th 1955 at the age of 28 he married Anne Ginter after a 2-year courtship. Mom and Dad’s first home was a modest 2-room army barrack located on grandpa and grandma Wiebe's yard which they made into a home for 1-year before moving to a larger more suitable house to raise their now growing family. David and Anne purchased a more permanent home close to Kane where they raised four daughters. Dad spent 30 years working in Kane for the local garage where he delivered fuel to local family farms and was well known and much loved by all who knew him.

The Church was important to Dad, he was brought up strong in faith and instilled the same in his family. While they lived in Kane (and in later years once Dad retired and he and Mom moved to Lowe Farm), Mom and Dad were members of Lowe Farm Bergthaler Church. Eventually they moved to Altona where they attended the Altona Bergthaler Church. At family gatherings and at church he could be found interacting with the children, who echoed sounds of laughter. Dad enjoyed watching baseball, playing skip-bo and crokinole with friends and family. Dad could often be found standing over and admiring the fruits of his wife’s garden, usually pulling a sample while he did.

Dad will be missed and loved for so long as we hold his memory.

The family would like to extend a very special thank you to the staff and caregivers at the Eastview Place care home in Altona for their nearly 3-years of care and dedication to Dad.

Thank you also to Pastor Mark Tiessen-Dyck and the Wiebe Funeral Home of Altona for their care and support.

Donations in memory of Dave may be made to the ALS Society, or to Eastview Place.

To order memorial trees or send flowers to the family in memory of David P. Wiebe, please visit our flower store.