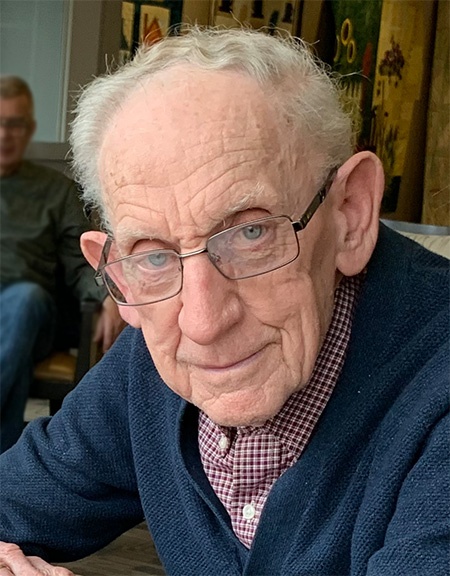 With sadness, the family of  David Sawatzky announces his passing on Sunday, September 6, 2020.

David (Dave) was born on May 29, 1933 to Peter B. and Maria Sawatzky (Hildebrand) in Halbstadt, Manitoba. He is survived by his loving wife of almost 64 years, Doreen; his children Ginny (Chris), Paul (Brenda), Harv (Vivian), Sharon and grandchildren Stephanie, Jill, Allie, Will, Sydney, Tom, Erin, Alice, Jessica, Nicole and Mackenzie, and their partners; and great-grandchildren Ben, Ted, Freddie, Clara and Sophie; and three sisters Nettie, Sue and Marge.   He was predeceased by his parents, and by his brothers Henry and Charlie, and sisters Tina, Anne, Mary, Helen and Betty.

Dave married Doreen Heinrichs of Strassberg on October 14, 1956.  A loving family man, he treasured the time he spent with his children, grandchildren and great-grandchildren.   He was a respected businessman for 27 years, starting out by joining his brothers Carl and Henry in working for their father at the Halbstadt General Store. The brothers purchased the store from their father and renamed it Sawatzky Brothers Ltd.  Dave was a pioneer in the sale and repair of televisions in southern Manitoba at that time at the Halbstadt store, and later as owner of Sawatzky's Home Entertainment Centre in Altona.  After selling the business, Dave and Doreen established a saskatoon hobby farm in the Village of Altona which they ran for 11 years.   He was an active community member in Halbstadt as a member of the Halbstadt Credit Union board and involved with the Community Centre; and in Altona, serving on the Justice Committee and on the Food Bank board and as a volunteer for a variety of other local organizations.  Service with the Mennonite Disaster Service took him to Florida, North Carolina and Iowa for tornado and hurricane cleanups and also back to Manitoba where he coordinated the cleanup after the 1997 flood.   He had a deep faith in God and was committed to his church, serving in various capacities including as deacon and chairing the church council.  He could always be relied upon to make sure the sound system was working properly and could be found sitting next to the soundboard at church services.   In his younger years, he played hockey and baseball and curled.   His lifelong passion was building and flying scale model airplanes.   Flying competitions took Dave and Doreen on regular trips to Winnipeg and across the U.S. where he made many friends and accumulated trophies, and along the way, crashed and rebuilt many planes. He persuaded fellow enthusiasts to join him in founding the Altona Flying Club.   A special thank you to his longtime flying companion, John Wiebe, for his faithful friendship.   Dave's interest in photography led to a longstanding and ongoing Christmas tradition of a family pictorial calendar.  He enjoyed researching local history and genealogy and contributed to a number of local history books including the Halbstadt Heritage book.

The family would like to express their heartfelt gratitude to all the healthcare providers at Eastview Community Health Centre, including the caring staff in the Blueridge dementia wing, and for the compassionate end-of-life care amidst COVID restrictions.

A private funeral service by invitation only will be held on Thursday, September 10, 2020 at 2:00 p.m. at the Altona Bergthaler Mennonite Church, with burial at the Altona Cemetery.  Viewing will be at Wiebe Funeral Home Altona on Wednesday, September 9 from 1:00 to 9:00 p.m.  A live stream recording of the service will be available for those who wish to view the service.

In lieu of flowers, donations may be made to the Mennonite Central Committee.

To view the livestream visit the church website by clicking the following link: Altona Bergthaler Church

To order memorial trees or send flowers to the family in memory of Dave Sawatzky, please visit our flower store.