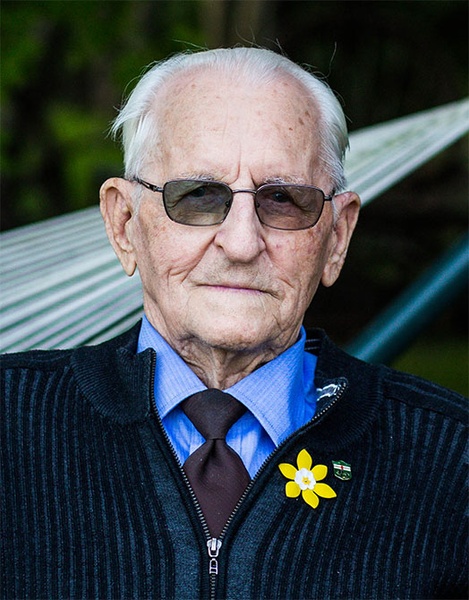 On March 17 at 11 p.m., our father, grandfather and great-grandfather slipped quietly and peacefully into his heavenly mansion prepared and ready for him in glory. He died as he lived: Always on time. He wasn’t late for this amazing appointment!

He was predeceased by his wife, Anne, nee Stoesz, one daughter-in-law (Lenore), one grandchild (Kirk John) and one great-grand child (Lincoln Jett). Also, his parents John and Annie Sawatzky, brothers Henry and John and sister Dora, plus 8 Stoesz in-laws.

Our father lived to be 97 years of age. He was born February 6, 1921 to John and Annie Sawatzky in the district of Weidenfeld. He grew up on the family homestead north west of Altona. Dad got his education through Grade 8 at the Weidenfeld School, after which he helped his father on the farm.

Dad met the love of his life, Anne Stoesz, through her many brothers – and two years later, on October 22, 19­­­42, they were married. They had a wonderful marriage of 68 years until our mother’s death in 2010.

Our father was a man of faith. He made his commitment to Christ at an early age and was baptized in the Sommerfelder Mennonite Church. At age 14, he preached his first short message when he and his dad visited his dying grandfather (our great-grandfather).

Farming became his life’s vocation, and he excelled at it, specializing in growing sugar beets. He was recognized by the Manitoba Sugar Beet Association several times for having the highest tonnage per acre.

While farming was our father’s vocation, he always had the ambition of being a teacher or possibly a doctor. Since he was unable to get more education to pursue that dream, he encouraged us as children and grandchildren to pursue a higher education.

In 1958 dad was elected to the ministry and became the pastor of the Rosenfeld EMMC. He was ordained in 1959 and served that church until its closure in 1971. Dad may not have had a high education, but he did take some evening classes on public speaking at the Elim Bible School and read a lot of books on preaching. He also received good mentorship from his friend and pastor, Rev. Ben W Sawatsky.

Dad was also sort of an itinerant preacher as he preached in 90 - 100 different places, in eight countries around the globe. In total, dad preached approximately 1,000 messages – but that does not count the numerous street meetings he preached at from 1953-58, before being elected to the ministry. A common thread in dad’s preaching was to challenge the audience toward salvation and living for the Lord.

For a number of years, dad headed up a DVBS short term ministry. He organized and took a group of youth to various communities in eastern Saskatchewan where they would teach several weeks of DVBS. After each such mission trip he and our mother would host an appreciation function with the team on our farm yard.

Dad’s ministry also included serving on various charity boards, such as the EMMC, Steinbach Bible Institute, Western Gospel Mission, Gospel Missionary Union and the Southern Manitoba Mission Society. He headed up the team that organized a Billy Graham crusade and a Lundstrom Ministry crusade in Altona. He was also very much a leader in the annual Southern Manitoba Missions rallies that were held under a tent on the Bergfeld EMMC property.

We as family have many, many fond memories of our father, grandfather and great-grandfather. To the very end of his life he displayed an attitude of positiveness, optimism and humor. He kept reminding us that life was too short to be negative and that he did not want to die a grumpy old man. He challenged those who visited him in the hospital to always be positive.

We want to acknowledge with thanks the love and care given to our dad these last few years. Thank you to the home-care personnel who came daily to provide assistance to our dad as he lived at Katrina Courts. Thank you to pastor David Friesen for visiting our dad almost daily at the hospital. That was much appreciated. Thank you also to Dr. Basta, Dr. Welch and the nursing staff at the Altona Community Memorial Health Center. Your amazing care and sensitivity to dad’s needs was greatly appreciated. We also want to thank all the friends and relatives who visited dad and the many prayers on our behalf. May God bless and reward you for your kindness and love.

Donations in memory of Dave Sawatzky may be made to Altona and District Palliative Care, or to E.M.M.C Missions.

To order memorial trees or send flowers to the family in memory of Dave Sawatzky, please visit our flower store.
Send a Sympathy Card