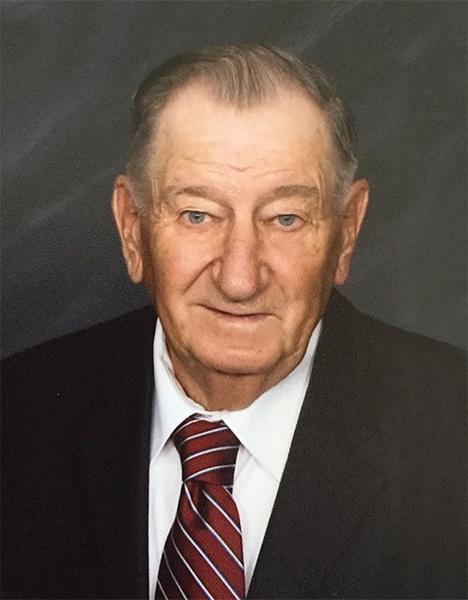 He is also survived by 2 sisters, Kay Stewart, Susan Kehler, 1 brother Abe, and foster Brother Dennis Wiebe. He was predeceased by his loving wife Dora, son in law Lorne Loeppky, 4 brothers, 1 Sister and his parents.

Dad was born at the Johann Wiebe homestead near Plum Coulee, Manitoba on March 30, 1934 to Jacob D & Helena Wiebe.  He attended the North Thames school (south of Horndean) till grade 8 and continued to work for his parents on the farm.  He was baptized upon the confession of his faith at Crystal City Sommerfeld church in spring of 1957.

During his younger and teenage years the Wiebe family lived south of Horndean where he had many fun filled years with siblings and friends.  When his parents moved to Cartwright he followed.  He continued helping his parents on the farm.  When the Wiebe brothers walked into a local event the trouble and fun began.

As a young man his winter time jobs varied from bush logging in Ontario, to working as a pot washer at the University of Manitoba. He would often talk about his university days telling people about his degree, after a long chuckle he would say that he got his degree as a pot washer.  It was during these years where he started looking for the love of his life, in the Gretna area, Miss Dora Driedger.

On July 20, 1958 he married Dora Driedger and they began their 54 year adventure.  The first year they lived near Cartwright on a farm. In October of 1959 they purchased a farm in the Rudnerweide district. They farmed there until they retired to Winkler, and Gerald and Patty moved to the family farm.  They farmed for 44 years, their mixed farm consisted of chickens, pigs and milking cows, cropping Sugar Beets, wheat, canola, barley, flax and edible beans. They had 6 wonderful children: Dorothy, Gerald, Gladys, Angela, Myrna, and Ruth.

A highlight in dad's years of farming, was the sugar beet season, where he and his neighbour Diedrich Friesen made many fun filled memories.  He served on the local sugar beet board, a school trustee, and volunteered many years as a 4 H club leader for the New Hope 4 H Sugar Beet Club.

Over the years Mom and Dad went on many holidays with family and friends.  A very memorable trip was when they took the family by train to BC.  Their travels also took them to Alberta to visit Gladys, Ron and family, to BC to visit Myrna, Mike and family.  Dad and Mom were always eager to be part of their grandchildren's lives.

Dad retired from farming in 2004. They moved to Winkler for their retirement years.  Here they made some very special friends. They kept themselves busy by going for coffee, out for supper, and attending many grandchildren Christmas concerts and activities.

When mom was not able to cook, she taught dad some kitchen skills and he stepped up to the plate. He even cooked his sisters a full course awesome surprise lunch.  When dad was not able to drive, his good friend Cornie Driedger took up the wheel and Cornie and dad became each others side kicks.  Last year dad made the decision to move to Buhler Active Living Center in Winkler. Once there he made many new and caring friends.

Dad will be remembered for his unique sense of humour, his generosity, his big heart and love for his family.  Dad will be sadly missed by all.

Funeral service was on Monday, October 30, 2017 at 1:30 p.m. at the Winkler E.M.M Church with burial at the Rudnerweide Cemetery.

Donations in memory of Cornie Wiebe may be made to the Boundary Trails Health Centre Foundaiton (Palliative Care).

To order memorial trees or send flowers to the family in memory of Cornie F. Wiebe, please visit our flower store.