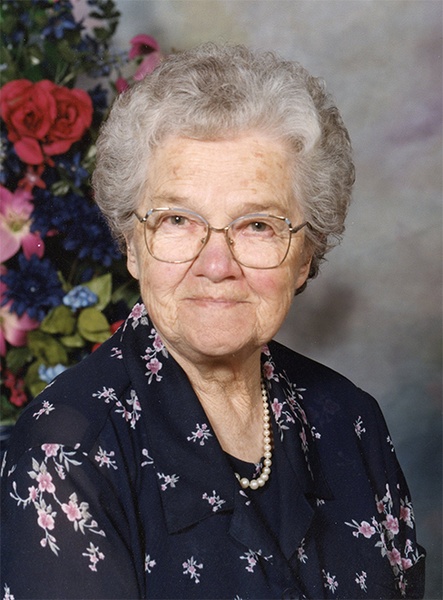 On June 8, 2015 at 9:15 am Our Mom, Grandma, Great Grandma, Sister and Friend Nellie Friesen passed into Glory.

"The heaviness of life kept increasing until she no longer had the strength to breathe. She was then released from her pain and broke free into the “weightlessness” of heaven. I like to think of her laughing when she took her first breath in Jesus’ presence."

Our mom was born Cornelia Driedger on December 23, 1923 to Abram & Helena Driedger. Nellie was the second of 8 children that included 2 sisters and 5 brothers. She grew up in the Gretna area.

On June 24, 1943 Mom married Diedrich Friesen. As newlyweds, Dad worked as a farm assistant and Mom as a house keeper. In 1948 they bought their own farm in New Hope and raised 5 children – 3 boys and 2 girls. Dad passed away in 1974, leaving mom with two children still at home. In 1983, Mom decided to leave the farm and moved into a new home in Altona.

Mom enjoyed gardening. She was known for her hospitality and took great delight in cooking for friends and neighbours. Spending time with her whole family gathered together was precious to her. As a family we will miss her home baked cookies.

She was always busy with her hands either sewing, crocheting, knitting or embroidering. She made quilts and pillows for every grandchild's graduation.

Nellie was active in her community. She sang in the church choir, and served many dedicated years at the MCC.

In 2008, Mom moved into Buffalo Apartments where she lived until she went to the hospital a little over a month ago on April 29. She passed away in hospital with her daughter Irene and her son-in-law Lawrence at her side.

In the early days of her hospital-stay she was known to say to family as they were leaving, “I love you, come again!” As the weeks passed, her speech became more difficult and on one occasion when the visitor started to leave she raised her finger motioning him to come back. When the visitor came back she told him “I love you.” During her hospital stay, family found a note that Mom had written which said “Let the good Lord take over, He knows best. With Love."

Her son Gerald (MaryAnn) Friesen and Grandchildren Macey; Joey (his friend Morgan); Cindy and Jared; all of Altona.

In addition, Nellie had the great blessing of 16 Great Grandchildren.

On one visit to emergency, Mom looked up at Elsie and quoted Psalm 121 verse 1 "I will lift up mine eyes unto the hills, from whence cometh my help – that`s my verse."

We as a family have the assurance mom is safe in the arms of Jesus.

To order memorial trees or send flowers to the family in memory of Cornelia (Nellie) Friesen, please visit our flower store.