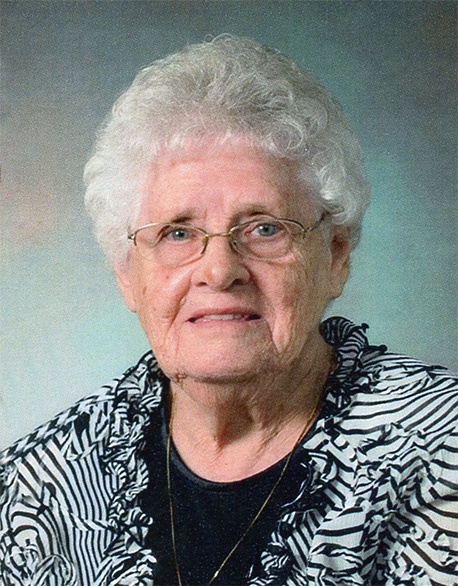 It is with heavy hearts that the family of Anne “Annie” Wiebe announces her passing. Anne aged 88 years of Altona and formerly of Kane and Lowe Farm slipped peacefully into the arms of Jesus on the morning of November 30th, 2020 in the company of daughters. The last few days were difficult, however as a family we were fortunate to be given the opportunity to say good-bye.

She leaves behind four daughters, Linda (Ernie) Neufeld, Shirley Guenther, Sharon (Rudy) Sawatzky, and Valerie Wiebe (Darryl); brothers Bill and Ed and their families; nine grandchildren; and nineteen great-grandchildren. Anne is predeceased by husband David, sister Frieda, brothers Henry, Jake, and Albert, Son-in-Law Rudy, and one great-granddaughter. A private funeral will be held at the Wiebe Funeral Home of Altona.

Second eldest of seven children, Mom was born on December 28th, 1931 to parents Sara and Wilhelm Ginter. Mom and Dad met somewhere around 1952 when Mom walked into the Kane Store. Following her passion for helping others, she began a career as a candy striper for the General Hospital prior to her engagement to David Wiebe in 1953. On account of this, the engagement lasted two years before Anne moved back to Kane and married David Wiebe on June 19th, 1955. Here Mom would keep a household and raise four daughters close to God, the church and prayer. Faith was a very important part of Mom’s life. She attended the Bergthaler Mennonite Church in Altona right up to her final weeks when she was unable to attend. She spent many hours praying for her family. In a letter she left her daughters she writes of her joys as a wife and mother, a housekeeper, a gardener, and of times she tried to help her daughters with their homework.

Mom was a hard worker and very determined. Mom loved her large and fruitful garden on the farm which she kept with Dad. After moving to Buffalo she still insisted she have a garden and still maintained one this last summer. Weeding never bothered her as canning often made up for the effort. For as determined as she was, the one thing she never was able to do was get her drivers’ licence. While Dad, daughters, a son-in-law and even a driving instructor tried to teach her, in the end Dad had to go pick her up as she was just too afraid that she might hurt someone.

She enjoyed cooking as well, which showed whenever she and Dad hosted guests for dinner. When Dad retired, he and Mom moved to Lowe Farm where more gatherings were hosted and late nights of cards were played amongst friends and neighbors. Monthly get-togethers with her siblings was something she always looked forward to. As age caught up with them, they moved from their house to Buffalo Apartments in Altona where she enjoyed the company of friends, puzzling, playing cards, and meeting for coffee… and yes, even weeding her small garden.

Dad’s passing in May was extremely difficult on Mom and almost immediately her health began to weaken. In recent months Mom has had many appointments with doctors and specialists with a few stays in the hospital to try to regain her health, but ultimately, I think she died of a broken heart.

In her letter, her final words “Love you all”.

Mom will always be loved and missed for so long as we hold her memory.

The family would like to extend a heartfelt thank you to Pastor Mark Tiessen-Dyck and the Wiebe Funeral Home of Altona for their care and support. And thank you to the staff of the Altona Community Memorial Health Center for the care provided to our mother.

A private funeral service will be held with burial at the Lowe Farm Cemetery.

Donations in memory of Anne may be made to a charity of one's choice.

To order memorial trees or send flowers to the family in memory of Anne Wiebe, please visit our flower store.