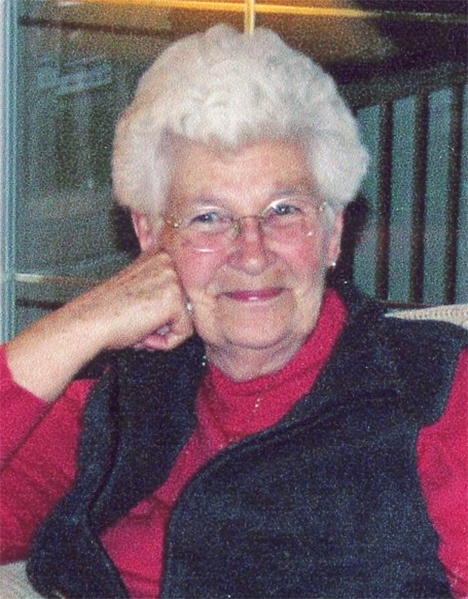 Alma Voth nee Funk passed away peacefully in her sleep on May 18, 2020 at the Boundry Trails Hospital.  She was born on the 13th of October 1931, the oldest of three daughters born to John and Kay Funk in the Amsterdam District.

I am told that mom was an independent person from a very young age.  Apparently in her early school years her and another student in her class had the same initials.  Since the school work was to be identified by initials it was obvious to mom this was not going to work, so she decided at this young age to change the first letter of her name Elma to an A for Alma.  The beginning of a life of strength and independence.

In 1952 on June 6th, mom married Arnold Voth.  They spent the next 48 years living in Altona, raising a family and working a variety of jobs.  Some of the jobs that mom had were, telephone operator, Avon lady, cleaning lady at the 4-Winds Motel, weeded beet fields, clerk at Growing Fashions, View Finders and Sears.

Through out her life mom has enjoyed many hobbies.  Some of these were curling, knitting ( it was amazing what she could knit), gardening, which of course, flowers gardens brought more pleasure than vegetable gardens, reading, bowling, singing in the church choir and attending TAB. TAB stands for Take A Break, a bible study group at church.

Mom was baptized in the Emerson United Church on the 21rst of June 1953.  Church was an important part of her life.  She hoed beets to help raise funds to start the Altona United Church, where mom and dad are both founding members.

When I mentioned the many jobs that mom had worked at, I did not mention what I believe was the most important one, a Mother.  As life progressed she had three sons and two daughters.  She was  very loving and strong at the same time. Since dad was a long distance truck driver she was left with the responsibility of raising her family alone a lot of the time.  I believe that not only did mom have good work ethics but that she taught that skill to all of us as well.

As some years passed, dad was able to quit driving truck and they bought Altona Freight Ways.  Here mom got to put her skills to work and start another career as an office administrator.

As we were together going down memory lane we recalled how dad had brought multiple dogs home over the years.  Dogs were not something she really cared for but came to love each one of them.

Mom had a very positive outlook on life and never wanted to be a burden on any of her children.  As the years went on and her family grew, she welcomed everyone with open arms.

Mom fell and broke her hip and wrist which was the beginning of her final journey.  They allowed a family member to stay with her in the hospital so she didn't have to be alone in her final moments.  We are very grateful that we were given that opportunity.

Mom was pre-deceased by her parents, John and Kay Funk; her husband Arnold Voth and her sister Kathy Doerksen.

Mom passed away in a very turbulent time in our world.  Because of this, not all of us has been able to see her recently, but are very happy with how well the staff, nurses and doctors treated her.  Thank-you to all that played a part in our mother's life.

A private family service will be held with interment at the Hochstadt Cemetery.  Viewing will be at Wiebe Funeral Home Altona on Wednesday, May 20 from 9:00 am to 9:00 pm.

Donations in memory of Alma may be made to Rhineland C.A.R.E. (Community Assistance Resources for Elderly).

To order memorial trees or send flowers to the family in memory of Alma Voth, please visit our flower store.