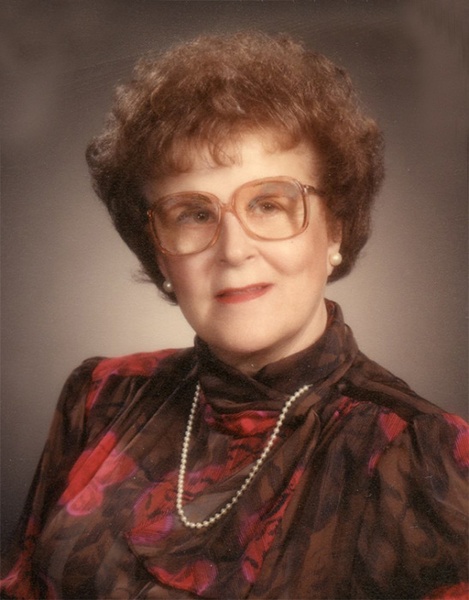 Agatha was born to Jacob F. and Aganetha (Wiebe) Broesky of Gretna, MB, the tenth of sixteen children. She enjoyed her youth playing with her many siblings and friends, singing with them on the family porch and on the streets of town, attending fellowship services and “literaries” at the Mennonite Collegiate Institute, and going to movies at the theatre in nearby Neche, North Dakota. In early adulthood, she worked for a time at the TB sanitorium in Winnipeg, and also as an operator at the Gretna telephone exchange.

At the age of eighteen, she met Jake Nickel of Weidenfeld/Rosenfeld at a community dance where he played saxophone in the band. After marrying on Dec. 12, 1942, the couple settled down on a farm Jake shared with his parents, John C. and Helena (Buhr) Nickel, near Rosenfeld. Here they raised their three children. They attended the United Church, first in Morden, then in Altona. Under the guidance of her dear friend and neighbour, Toots Friesen, Agatha became an outstanding homemaker and cook, and like many of her sisters, had a keen eye for fashion. She and Jake loved to travel and eventually included a Grand European Tour. They took numerous road trips with the family, California being a favourite destination. Jake and Agatha also went to dances, curled, bowled, looked after their large yard and gardens, and enjoyed entertaining friends and family in their home. Agatha took up voice lessons and sang in the community choir.

After Jake died in 1971, Agatha married John Tapper of Minneapolis, Minnesota, on May 3, 1975. She fully embraced city life in Minneapolis, becoming an active member of Knox Presbyterian Church and her local gym, and taking advantage of the many cultural and shopping opportunities offered by the big city. She always planned special activities for her grandchildren when they visited, of which they have particularly fond memories.

After her second husband died in 1983, Agatha continued residing alone in her condo in Minneapolis—evidence of her persevering nature and resilience—before moving to an apartment in Winnipeg in 1991. She attended Westminster United Church for a time. After living at the Waverley Retirement Community for several years, she finally took up residence at the Poseidon Care Centre, where she was known for her humour, the songs she sang, and her strong spirit. It was there that she died suddenly and peacefully, one month after celebrating her 100th birthday with her children, grandchildren, and great-grandchildren.

We the family would like to thank all the staff at Poseidon for their excellent care; visiting pastor Grace Aoki of the Westminister Church, from whom our mother received communion and spiritual comfort; and funeral director Trevor Groening for his thoughtful guidance. A private graveside service will be held at Weidenfeld Cemetery, followed by a Celebration of Life some time in the future. Donations in her name can be made to the Mennonite Collegiate Institute.

“He speaks and the sound of His voice
Is so sweet the birds hush their singing.
And the melody that He gave to me
Within my heart is ringing.”

To order memorial trees or send flowers to the family in memory of Agatha Nickel Tapper, please visit our flower store.