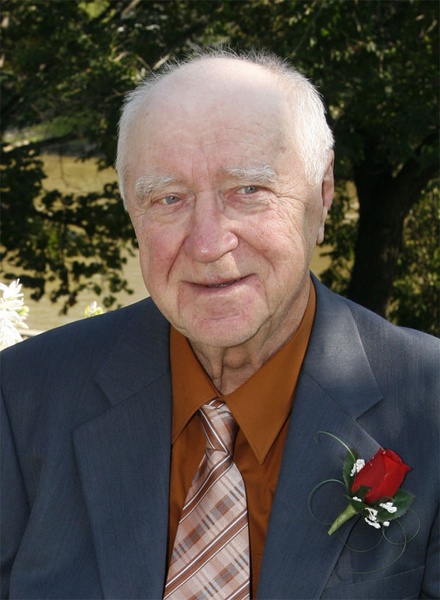 Abe was predeceased by his wife Mary in 1999.

Abe was born on a small farm in Hochstadt near Altona. He grew up, one of twelve children. After completing grade 11 in high school he began working to make his own way in the world. In his younger years, his wanderlust took him to a farm in BC, a gold mine in Red Lake Ontario and a number of other jobs. He came back to help his dad on the farm and learned the bricklaying trade.

After he met and married Mary Kehler on November 16, 1952 they settled in Altona, and started a family. When Abe’s father died in 1964, Abe took over the bricklaying business and later learned how to repair radios and TVs. This became a part-time business.

As the family grew, they moved out to rural Altona in 1970. Around the same time, he was doing a lot of Bible Study. He and Mary eventually came to know Jesus personally through contact with the Worldwide Church of God. They enjoyed the fellowship they had for many years.

Soon after moving to the country Abe retired from bricklaying and began providing transportation for handicapped people in Altona. When Mary had a stroke in 1990 it gave him the ability to be with her most of the time because of the part-time schedule. In 1995 they moved back to the town of Altona, only two blocks from where they had lived previously. In November of 1999 Mary passed away.

In the years since, Abe was able to pursue his interests in reading (he loved to read a variety of subjects), bike riding, skating, playing pool, fishing, hunting and especially golfing. He very much enjoyed his children and grandchildren, and loved attending his church.

This past summer, we knew he wasn’t well but he didn’t like going to doctors. When he did get checked several weeks ago and cancer was found, he accepted it graciously. He knew it wouldn’t be long for God to take him. He was ready. He had the hope of better things to come.

Funeral service was held on Friday, November 21, 2014 at the Altona Mennonite Church.  Interment took place at the Hochstadt Cemetery.

Donations in memory of Abe Kehler may be made to CancerCare Manitoba or to M.C.C

To order memorial trees or send flowers to the family in memory of Abram B. Kehler, please visit our flower store.